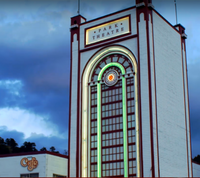 Equally at home in front of 40,000 cheering fans at an international festival, with the widely recognized, Grammy award winning, symphony orchestras, or with 300 fans in a small Midwest club, SEVEN NATIONS has created a truly hybrid sound and transient live show. The depth and complexity of SEVEN NATIONS' music is astounding, each listen reveals a deeper layer of intricacy that has been embraced by an ever growing audience. "We are lucky," says McLeod, lead singer/songwriter and founding member of the band, "because we come from two unique cultures. We love American pop and rock and roll, but we also love our Celtic roots. We want to touch everybody with our music," he continues, "and so far, we have been very, very fortunate."

"Seven Nations is blazing a new path in the "indie" music world for others to follow. Rarely has there been a CD with such variety so skillfully played, a testament to the multi-talented Seven Nations." - Brigid's Feast

"Full of hooks, addictive melodies, and precise musicianship, Seven Nations may be the next frontrunners for the summer tour feel-good band of the new millennium." - MusicBlitz

"The music was riveting ... folks were dancing in the aisles ... the cheers were deafening." - Independent Mail

"Wow, what a discovery! Each song is laden with hooks and melodies that stick in your brain, thanks to songwriter Kirk McLeod, who pens the best lyrics since Phil Lynott. This is the stuff of legends."- Chaos Realm